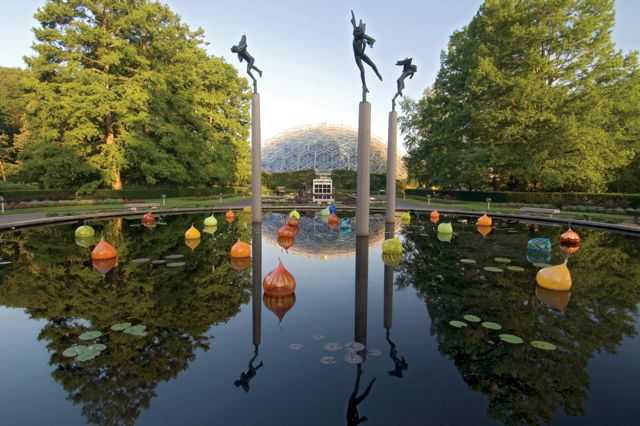 The Missouri Botanical Garden, the oldest continually operating botanical garden in the United States, is celebrating its 150th anniversary this year. On June 15th the Garden will be open to the public for an entrance fee of $1.50, a part of the year-long sesquicentennial celebration, Missouri Botanical Garden: Green for 150 Years. On this day, Founder Henry Shaw first opened his beloved garden to the public and the Museum Building, an historic building originally housing Henry Shaw’s library herbarium, will be open.

When Henry Shaw arrived in St. Louis in 1819, St. Louis was only slightly larger than the original fur trading village that had been laid out by Auguste Chouteau in 1764. As part of the day’s activities, Emily Jaycox from the Missouri History Museum will present “Mapping St. Louis in the Era of Henry Shaw.”  Jaycox will deliver an illustrated talk on the St. Louis of Henry Shaw’s day, using maps from the museum’s collections. Visitors can also learn about the histories of both the Missouri Botanical Garden and Tower Grove Park from Andy Colligan, the Garden’s archives librarian.

For over 150 years the Missouri Botanical Garden has been an iconic treasure nestled in the heart of the city of St. Louis. With scientists conducting research in 38 countries, the Garden is a center for botanical research and science education.  Dr. Peter H. Raven, president and director of the Garden, will discuss the past, present and future of the Garden. For more than 30 years, Raven has headed the Garden, an institution he nurtured into a world-class center for botanical research and education, and horticultural display. Described by Time magazine as a “Hero for the Planet,” Raven champions research around the world to preserve endangered plants.