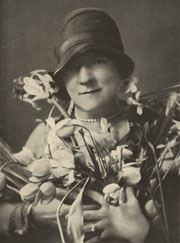 The number of publications aimed at the garden owner surged in the early 20th century. Many of the most popular garden writers were women, some of whom are still read today. Landscape historian Diane Newbury brought the world of gardening in the 1920s to the fore by spotlighting the works of Louise Beebe Wilder, Marion Cran, Ruth Deane, Elsa Rehmann, and Mrs. Francis King—authors of engaging books and articles that gave sound advice and encouragementat at a recent talk presented at Winterthur Museum and Garden. her readership, the new suburbanites.

The owners of smaller homes needed advice for smaller gardens and Mrs. Francis King wrote several books including “The Little Garden,” her readership – new suburbanites.  She believed that gardening was a force in democracy that brings people together.  In 1923 Mrs. King was recognized for her part in the establishment of the Garden Clubs of America.

Ruth Deane, another early 20th Century garden writer, was a Landscape Architect, a new modern woman, Ms. Newbury explained.  In her book, “The Little House, Its Garden”  Ruth Deane encouraged people to go out to garden, that the garden design should draw people out.

Elsa Rehmann was a graduate of Amber with a Landscape Design degree from Temple University.  She believed that a garden should involve all the senses, eyes – color, ears – rustle of …, feel – the grass, fragrance – flower, and taste – it all! Ms. Rehmann wrote “American Plants for American Gardens” and was a contributor to “House Beautiful” magazine.