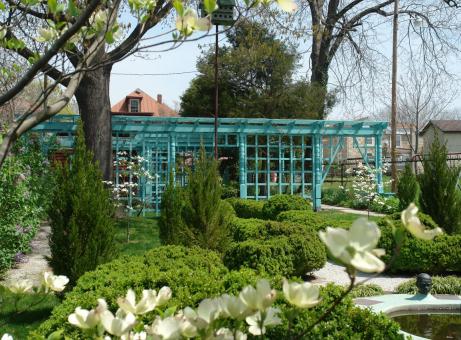 The restoration of Anne Spencer’s garden was adopted as a project by Hillside Garden Club in September 1983. The original garden, with its young shrubs and trees, was an open, sunny garden with masses of flowers and grass paths. To reproduce this after years of growth was not possible or practical. However, the garden framework is authentic, as substantiated by the many old photographs and family memories, and effectively captures the spirit of the garden from the late 1930s. Many of the bulbs, flowers, and shrubs and all of the roses are Anne Spencer’s own plants. Additional flowers were shared by garden club members from their own gardens. The first restoration was substantially completed by June 1984 and received statewide recognition in 1987 with the Common Wealth Award from the Garden Club of Virginia. With the publication of the story of the garden restoration in the national magazine, The American Horticulturist (October 1987), the garden became a nationally recognized rehabilitation effort.

The Garden Conservancy also supported the garden restoration process. Spencer’s garden was sunny and its restoration includes many original bulbs, flowers, shrubs and roses.  A second major restoration taken on by the Hillside Garden Club tackled the replacement of the garden’s arbor, pergola and pond which were painted the original robin’s egg blue.

The Anne Spencer garden and home have received much recognition including an article in the British publication Historic Gardens Review in its Summer 2011 issue.

The 28-year-long story of the restoration and maintenance of the historic garden is illustrated in Jane Baber White’s book, Lessons Learned from a Poet’s Garden (2011). The award-winning book, Half My World (2003), by Rebecca Frischkorn and Reuben Rainey, explores the history and design of the garden and its influence on her work as a poet.

Anne Spencer’s garden will  be featured in the upcoming Southern Historical Garden Society Symposium in May.