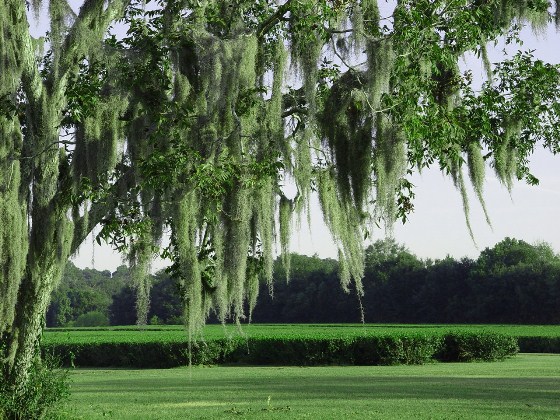 Tea thrives in growth at the Charleston Tea Plantation located on Wadmalaw Island, South Carolina.  Hundreds of varieties of the tea plant, the camellia sinensis, can be found here, at this American tea plantation.  Wadmalaw Island, South Carolina is located in the region commonly known as the Low Country.  Its frequent rain, high heat and humidity are an ideal climate for growing tea.

In the 1700’s, the camellia sinensis first arrived in the United States from China.  Several attempts were made in South Carolina over the next 150 years to propagate and produce tea for consumption, but none were triumphant.

Not until 1888, when Dr. Charles Shepard founded the Pinehurst Tea Plantation in Summerville, South Carolina, did American grown tea become a reality.  In Summerville, Dr. Shepard created award winning teas until his death in 1915.  For the next 48 years, the tea plants grew wild at Pinehurst.

In 1963, the Lipton Tea Company purchased a 137 acre potato farm on Wadmalaw Island, South Carolina, and transplanted Shepard’s tea plants from Pinehurst to the farm.  For 24 years Lipton conducted research on this experimental farm.

In 1987, William Hall purchased the farm from Lipton Tea Company.  Hall, a third generation tea taster, who received his formal training in a four year tea apprenticeship in London, England, converted the research and development farm to a commercial operation.  Thanks to Hall’s persistence, the Charleston Tea Plantation became and still is the home of American Classic Tea, tea grown in America. In 2003 Hall partnered with the Bigelow family, who brought to the plantation 60 years of experience in the specialty tea business.  Since 2003, the Charleston Tea Plantation has transformed into a true American dream.  American Classic Tea has maintained its faithful fans since its start in the late 1980’s and has continued to prosper as a result of consumers wanting to experience tea grown and produced in America.

Today the Charleston Tea Plantation offers more than just a cup of fresh tea.  The true working tea farm presents a learning experience unlike any other in the country.  On the Tea Facto , ry Tourvisitors are guided down a plexiglass tour way overlooking the factory by the Bigelow’s themselves (via several flat screen televisions) and educated about the history of tea, Bigelow Tea, American Classic Tea, the Plantation, and the actual harvesting and production process that takes place onsite at the Charleston Tea Plantation.  There is also a narrated Trolley Tour available that transports guests around the tea fields as they listen to a voiceover of William Hall, educating them about the history of the property and its plants.  The experience is not only educational and exciting, but is most importantly one-of-a-kind!  The tea plantation is open daily (Monday-Saturday from 10-4 and Sundays from noon-4) and admission is free.

« The Anne Spencer Garden
“Someone’s Been Digging in the Dirt,” the Annual Symposium of the Southern Garden History Society »