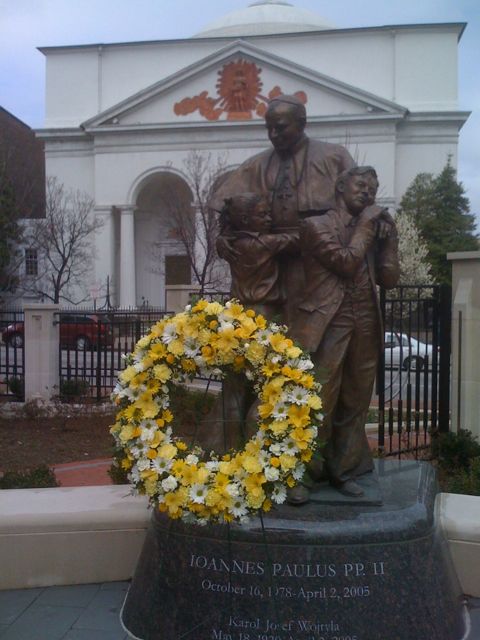 ‘Tis Divine Providence that today my husband and I met for lunch in Baltimore, picked up a sandwich at Trinacria’s Deli – a great muffaletta for $5.99 to more than satisfy two.  Where should we eat, a park when there’s no place to go.  We were on a date and he thought of the prayer garden built adjacent to the Basilica of the Assumption, built from 1806 to 1821 and designed by Benjamin Henry Latrobe.  It is the first Catholic Cathedral in the United States.  Here is the statue dedicated to the life of Pope John Paul II.  We were looking at the landscaping and then the statue of His Holy Father and the children he held his hands around and then the fresh garland of yellow flowers and then the description.  How unbelievable.  Today (yesterday) is the anniversary of Pope John Paul II’s death in 2005.  Divine Providence that he stands in front of the First Unitarian Church of Baltimore, built in 1817.  The original terra cotta relief above the doors was designed by Antonio Cappelano.  The “Angel of Truth” floats above the Greek inscription on the scroll, “To the One God.”