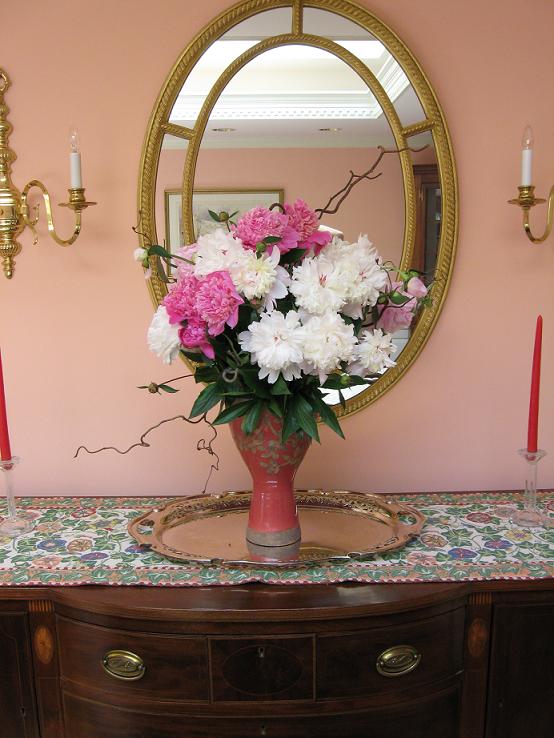 No more peonies! I was going to ask my neighbor the other day (and I don’t even know her, yet I was knocking at her door at 8:00 am) if she would share some of her peonies because all of mine had been picked. In exchange I would give her the arrangement I was going to make. I had bought some white hydrangeas and wanted to put them with the peonies. Actually I wanted the soft pink and white with a dab of pink. Her’s were the hot pink. But just for the shape I wanted (a mound) the hot pink would do. Two days later I did introduce myself to her as she was out gardening. The hot pink petals were lying in the street. So instead of the mound of peonies and hydrangea (which were used at a recent wedding), I show you an arrangement of all peonies.

The vase is something special from Pier One. It looks Oriental to me and the shape is conducive to holding a fair amount of flowers but it isn’t necessary to fill the top opening with so many because the base gathers enough to fill it in. I really like the color pink. This vase has an interesting muted pink that doesn’t take away from the show. Right now it is in a Thai restaurant wowing the customers I hope!

Tip: Peonies don’t hold up easily so support them. If it’s a one dimensional arrangement, some branches will hold their heads. If you can get a hold of some Harry Lauder Walking Stick branches, even better. They are showy and give you another dimension. A fellow garden club member gave me the hint.