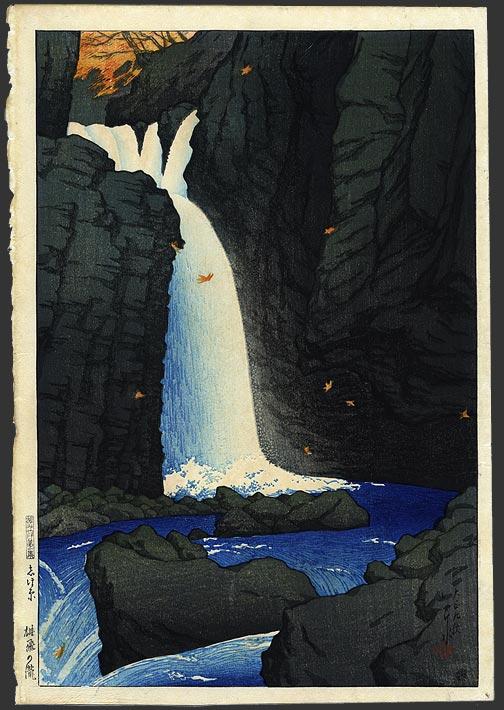 Kawase Hasui (1883 -1957)
Known for his exquisite landscape prints, Kawase Hasui was one of the most prolific and talented shin hanga artists of the early 20th century. He designed around six hundred prints total, mainly for the publisher Watanabe Shozaburo. Many people feel that Hasui’s most original work was done at the beginning of his career. Unfortunately, the blocks for these early prints were destroyed in the devastating 1923 earthquake and they were never reprinted. Like Hiroshi Yoshida, Hasui travelled frequently and filled sketchbooks with his drawings of scenic places around Japan. Many of his print designs are based on his beautifully executed watercolors. In 1953, the Japanese government decided to commemorate traditional printmaking. They were prepared to honor Hasui as a National Living Treasure, but realizing the collaborative nature of his prints, they decided to commission a special woodblock print. ” Snow at Zozoji Temple”, was designated as an Intangible Cultural Treasure, a great honor for Hasui and for the craftsmen that made his prints possible.
www.theartofjapan.com
www.frazerfineart.com
« Korin Moyo, 1907, Japanese Wood Block
Brooklyn Botanical Gardens Cherry Blossom Festival 2009 »