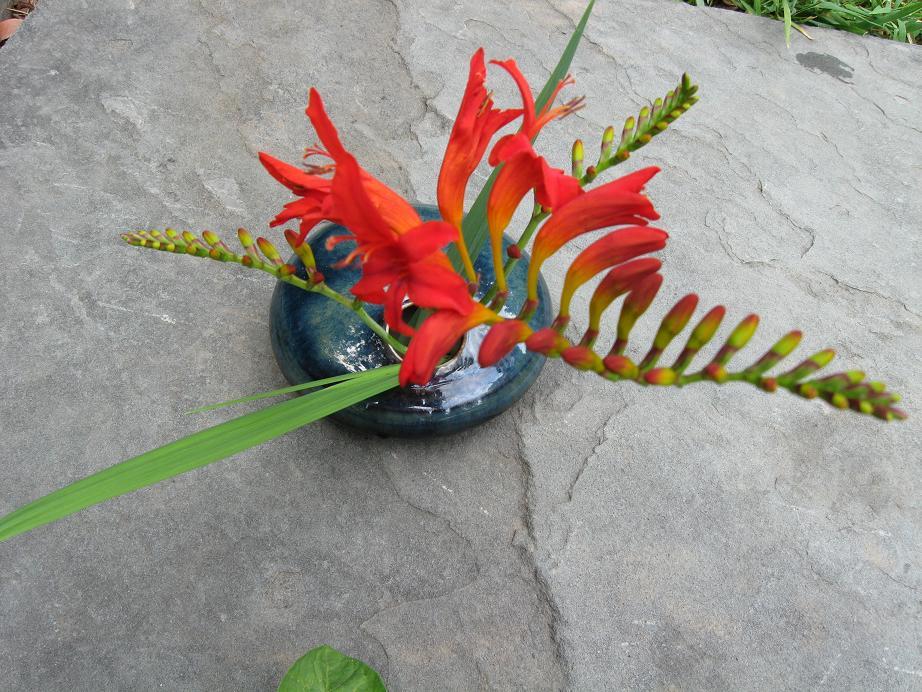 There probably isn’t anything called a crocosima vase, I just made it up.  But it serves my purpose – to show you the most gorgeous flower and to show you a vase that lets you show off this specimen, is pretty and can be used for umpteen purposes.  The crocosima leaves look like a bearded iris’s.  The stem is long and three heads are on it.  Similar to the arrangement here, the bloom in the middle opens first and is the biggest.  Its brother and sister on either side are smaller in comparison.  I liken the form of this red beauty to a stealth pilot and it is best to look at it from top down.

From my neighbor’s garden (hopefully) I’ll have some next year), we put it in a vase with a frog.  No, not the kind that ribbets. This is metal with a base that holds a bunch of upright pins.  Frogs are the best for keeping flowers where you want them.  They are small and can be gotten at Michael’s, JoAnn’s, Moore’s etc.  My friend got her vase at the Philadelphia Flower Show.  In fact she got two of them, one smaller than the other.  They are made of thin glazed ceramic.  What is so cool about a vase like this is that you can just take one or two cuttings from you garden, put it in your vase and you have an instant arrangement.  (We all know how difficult it is to part with our garden flowers.)  If you just buy a single frog at the store, put some putty under it before inserting it into your vase or else it may move or crack it.

Hint:  Use a frog so your flowers don’t jump.