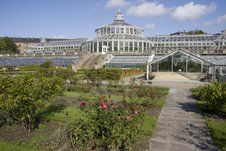 The Copenhagen Botanical Garden and Museum is situated in the heart of Copenhagen. The garden has the largest collection of living plants in Denmark. The museum holds one of the largest herbaria of plants and fungi from all over the world.

Copenhagen Botanical Garden’s Greenhouse design was influenced by The Crystal Palace in London, England.  As part of Copenhagen University’s fourth botanical garden, Vold Garden, it was created on the site of the remains of the earthen fortification that until that time had surrounded the city.

Landscape gardener H. Flindt designed the garden’s layout and terrain, while Head Gardener Tyge Rothe and brewery owner J.C. Jacobsen planned and supervised the greenhouse construction from 1872 to 1874. The architect of the Palmhouse was Peter Christian Bønnecke. The greenhouse complex was quite an impressive structure according to the standards of the day, built of cast iron, wood and glass, enclosing an area measuring 2400 sq. metres. The garden was opened to the public on October 9, 1874, 274 years after the founding of the first botanical garden, Hortus Medicus.

Among the first important collections to be incorporated in the new Royal Museum were the botanical collections made by Pehr Forsskål on the Royal Danish expedition to Egypt and Yemen in 1761-63.

This was a multidisciplinary expedition which made observations and collected scientific material within many fields, including botany, zoology, geography, ethnology, etc. During this period, the collections were used by a number of Copenhagen botanists, for example the well-known cyperologist Christen Friis Rottbøll.

In 1877 a new building was constructed inside the present Botanical Garden just after it was established. The name “Botanical Museum”, rather than simply the Herbarium, originated from ideas of that time. It was the plan to combine the scientific collections with public exhibitions. However, these plans have remained on paper except for one or two annual public exhibitions held in the current museum-building.

The increasing number of collections made by the museum staff, other professional botanists, and numerous skilled amateurs made it necessary to include additional buildings in order to house the collections, but these were mostly temporary storage space.

Today the Botanical Museum is part of the Natural History Museum of Denmark, Copenhagen University.