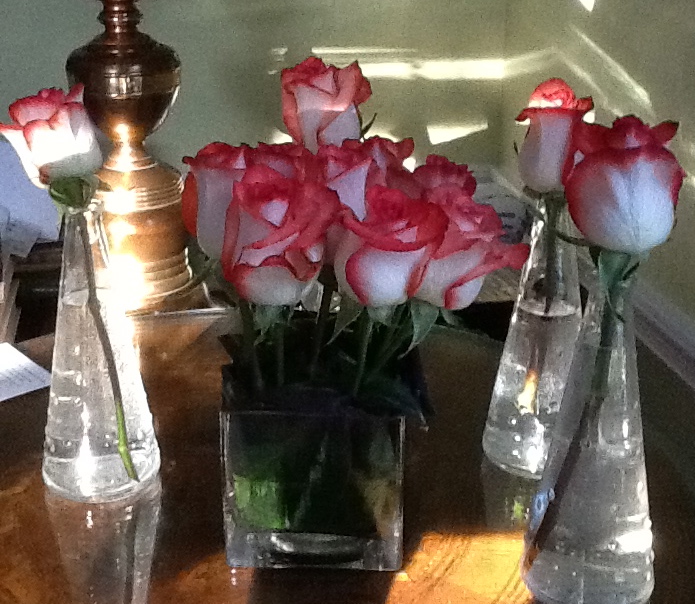 Burghers of Calais and Blush Rose

The Blush rose is white tinged with red.  When cutting these stems under conditioned water I noticed how straight the stems were.  Not only straight but like a rod with some reinforcement.  First I arranged the roses in a cube, its square holding eight roses in upright fashion.  I studied the arrangement over night and decided the next morning to lop them off as to create a square of Blush roses on top of the cube.  The stems had turned, going in the direction they cared to go. The floor and sides inside the cube were lined with Calathea flowers, big, fleshy, and full of light, dark and a tinge of red.

Now the Burghers of Calais struck me.  How the roses slightly turned yet their mass still there.  I had no control over this turning.  Could Auguste Rodin, the sculpture of the Burghers of Calais, commissioned by the town of Calais, France, mold his men cloaked in their robes of importance and have complete control of the movement of the rod and metal of his material?  His men were sculpted in unity and mass, slightly turning a head, a shoulder, to define their acceptance, pride, abjection, defeat.  Yet their lives were spared because the king’s wife would not want her expectant child to have the blood of the rose spilt on her cradle’s sheets.

« “The Garden Diary of Martha Turnbull, Mistress of Rosedown Plantation,” Edited and Annotated by Suzanne Turner
Four Things to know about Edith Wharton and her book, “Italian Villas and Their Gardens” »