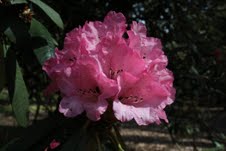 Westonbirt, the National Arboretum of England, is using a method to grow new plants from some of the collection’s oldest and rarest rhododendrons. The technique, known as air layering, tricks the plants into growing new roots from their branches. The roots produced are often stronger than those grown from cuttings because they have the live plant for support.

This is the first time the technique has been applied at the Forestry Commission managed National Arboretum in Gloucestershire. Good results will mean the team can grow new plants from rare hybrids introduced over a century ago by founder Robert Holford and his son, Sir George Holford. The Holfords used selective breeding and seeds collected by famous Victorian plant hunters to create larger hybrid varieties to suit the extravagant gardening fashions of the era.

Amongst the plants the technique is being applied to is the Rhododendron griffithianum hybrid, ‘Daphne Millais.’ The pink blooms differ from smaller varieties bred for the modern garden, marking the variety as a hallmark of Victorian and Edwardian taste. Small areas of the rhododendron branch are wrapped with moss and rooting hormones then sealed in black plastic, locking out the sunlight and convincing the plant that it is underground. The roots are then left to grow on the plant until they are strong enough to be potted.

Penny Jones, propagator at the National Arboretum commented: “The rhododendrons we want to reproduce are very exciting from an historical point of view; they represent one of the most significant periods of horticultural development at Westonbirt. Restoring and replanting these plants helps us to preserve the collection for visitors in the future. “If the air layering method proves to be a success, the team at Westonbirt hopes to extend the propagation programme to include other rare varieties in the collection.”

Rhododendrons start flowering in April and peak throughout May.

Entry to Westonbirt, the National Arboretum costs £8 adult, £7 concession, £3 child. Visit on a Wednesday in April and May and take advantage of half price admissions.

« Suzy Bales, American Horticulture Society’s Garden Writer of the Year, Shares a “Morning in the Garden” to Benefit the Community Projects of the Hardy Garden Club of Baltimore, Maryland
“The American Impressionists in the Garden” Exhibit at Cheekwood Botanical Garden and Museum of Art, Nashville, Tennessee »