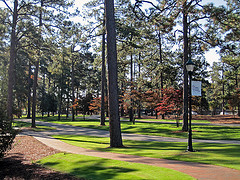 Warren H. Manning came from a New England family, a family with a strong horticultural background. According to Robin Karson in her book, A Genius for Place, published by University of Massachusetts Press in association with the Library of American Landscape History, his father, Jacob Warren Manning, was considered, “the dean of the nursery trade in New England.” Karson goes on to describe his mother, Lydia Chandler Manning as a woman who wanted to instill in her five sons, ” a desire to make America a finer place to live.” In 1888 Manning was hired by Frederick Law Olmsted. Karson points out that Manning when writing a letter to Olmsted for employment stressed his “knowledge of hardy trees, shrubs, and herbaceous plants & their treatment & the effects produced by them, the common and botanical names & botanical relationships.” His skills also included the ability to move large shade trees, horticultural skills stronger than those of his new employer.

A Genius for Place follows Manning’s career and those of six other significant American landscape architects of the era. Nine years later Manning left Olmsted’s firm to start his own. “His first commission was for James W. Tufts for the new resort village of Pinehurst in North Carolina,” writes Karson. His skills learned with his association with the Olmsted firm, the first landscape architectural firm in the United States, gave him “sophisticated design skills” Karson describes. His knowledge included land use planning, pertinent to his design of Pinehurst and its surroundings.

According to the The Cultural Landscape Foundation, (TCLF), the only not-for-profit (501c3) foundation in America dedicated to increasing the public’s awareness and understanding of the importance and irreplaceable legacy of its cultural landscapes, Warren Manning remained with Pinehurst and the Tufts family for 46 years. He designed “the 100-acre resort (centered) around a village green nestled into a shallow amphitheater-like depression. Concentric and radial curvilinear streets are lined with hilltop homes in a variety of sizes and materials, each set back 36 feet. Though this arrangement creates generous expanses of green space, the barren, sandy soils of the site complicated developing a park-like setting. More than 225,000 plants were added during construction, with a preference for native plants and a dual emphasis on spring blooming flowers and winter evergreens. Sunken street side shrubbery beds doubled as gutters,” notes TCLF.

“Pinehurst is widely recognized today for its well-preserved Golf Course Number 2, designed by Donald James Ross. Golf Course Number 4 was the work of Robert Trent Jones and Rees Jones. Other site features include an equestrian center pine grove, and deer park. Pinehurst was designated a National Historic Landmark in 1998,” according to TCLF.

Pinehurst Today
“The Village of Pinehurst, as a National Historic Landmark (“NHL”), holds enormous significance in the history of landscape design. As the only NHL in America whose landscape significance is derived from the contributions of Frederick Law Olmsted, Sr. and then Warren H. Manning, Pinehurst represents an iconic example of resort and community planning. It is this nationally significant legacy that The Cultural Landscape Foundation seeks to interpret, preserve and protect for future generations,” writes TCLF in its current efforts to maintain the integrity of Manning and Olmsted’s original design.