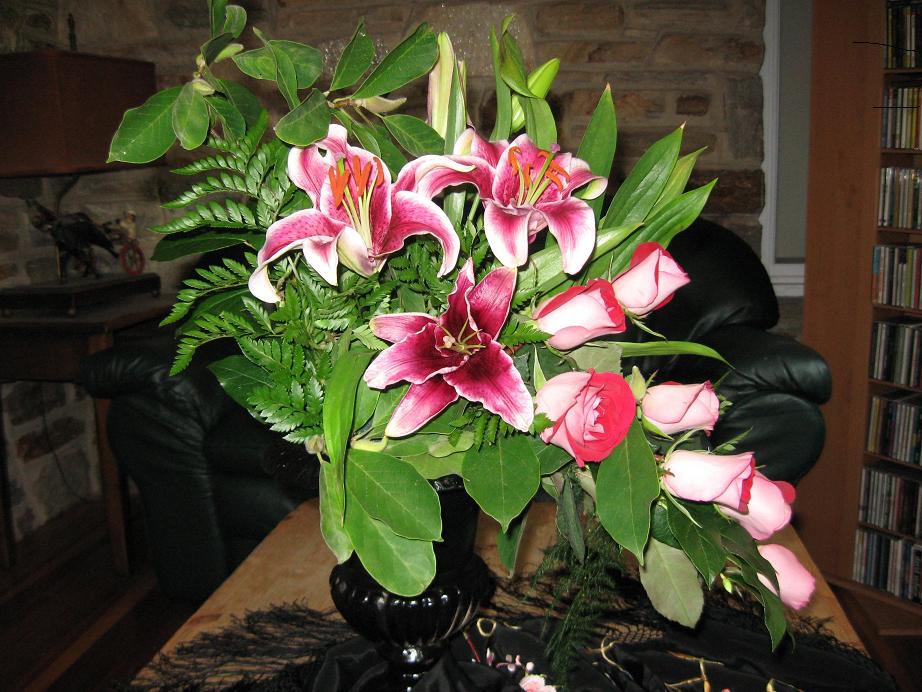 What a find – a 10″ cast iron urn at the Talbot County Historical Society store.  I needed an urn at a good price and there I got one. I feel it my duty to show some of the styles of arrangements that are judged by the various garden clubs. This one is the Hogarth Curve – an inverted “S”.  Mine might get a “B-” because its curve is more angular than circular.  I will definitely try again.  Maybe next time with some green material  like Bells of Ireland that have a natural curve to it.  I used branches of my tulip magnolia putting one on the high end and the other across on the low end.  Baker’s fern cut into small pieces added further depth.  The Stargazer Lilies are magnificent and because they are round they create a circle in the middle.  Then the Latin Lady roses pull the arrangement out and down.  I’m not sure that they are the best color for a flow.  If I had some deeper red roses or a combination of the two I think there wouldn’t be such an obvious color change.  When I envision a Hogarth Curve I think of lighter materials.  My arrangement is pretty dense even though I did pull a lot of leaves out of it.  You’d think I was one of those judges but just using a critical eye and looking at garden books constantly I know we’ll need to revisit this Hogarthian Curve.   Suggestions anyone about  what colors and material you would use?

« The Eastern Shore of Maryland
Adkins Arboretum in Ridgely, MD »