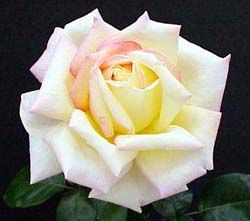 “…my eyes are fixed in fascinated admiration on a glorious rose, its pale gold, cream and ivory petals blending to a lightly ruffled edge of delicate carmine.  There it is before me, majestic, full of promise, and I am convinced it will be the greatest rose of the century,” so wrote Mr. Robert Pyle of Pennsylvania about the  yet unnamed rose, 3-35-40, to become known as the Peace rose.

Princess Grace of Monaco with Gwen Robyns in their book, “My Book of Flowers,” tells the story of the Peace rose, how it was raised by the Meilland family near Lyon, France, how they sent three bushes out of the country, one to Italy, one to Germany, and the third spirited away by the American Consul on one of the last flights out of France before communications went down during the Second World War.

Royalties accrued for the Meilland family as growers around the United States placed orders through the efforts of Robert Pyle.  The day Berlin surrendered to the Allies, April 29, 1945,  rose growers met in Pasadena, California and named 3-35-40 the Peace rose.  Six months later, the day Japan surrendered, the Peace rose received a rose’s highest honor, the All-American Award.

Santa Clarita Valley Rose Society has more about this lovely story on their website: