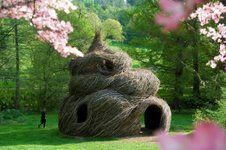 Now on display in the Morris Arboretum’s Madeleine K. Butcher Sculpture Garden is a new, original abstract sculpture, by internationally-renowned artist Patrick Dougherty. The intriguing, site-specific piece is titled The Summer Palace and was created by Dougherty, with the help of staff and more than 75 volunteers, during a three-week Arboretum artist residency. The finished work is constructed entirely of sticks and saplings, and consists of three rounded “layers” with a top that resembles the quintessential onion-dome characteristic of Russian and Byzantine architecture. The first layer of the piece, which is accessible to the public, features a spiraled interior and several “windows” which allow the viewer a “peek” inside. While striking in its size at just over 25 feet high, the structure maintains an earthy accessibility.  Dougherty, who waits until each installation is complete before naming it, solicited input from visitors, volunteers and Arboretum staff before ultimately deciding on The Summer Palace.  Reminiscent of Dr. Zhivago, the name also fittingly recalls how the Morris Arboretum began as the summer home of founders John and Lydia Morris.

Patrick Dougherty’s artistry emerged just over two decades ago when he switched gears from health administration to focus on his love of art. His first medium was clay, but he quickly realized he wanted to work on a much larger scale. He turned to saplings, recognizing them as a plentiful and renewable resource – but also because he felt it was a material everyone could relate to. “People of all ages, and even animals feel some connection with sticks,” said Dougherty.

In preparation for his arrival, truckloads of twigs and saplings, consisting mostly of willow, dogwood, maple and birch were gathered locally. For his part, Dougherty, who had previously visited the Arboretum and chosen the site for the installation, arrived with only a snail shell he had found in his North Carolina yard as inspiration. He was intrigued by the idea of a spiral shape and the opportunities for imaginative discovery it could provide. After laying the groundwork, Dougherty and his helpers persevered through every kind of weather to intricately weave together the hundreds of saplings during his three-week residency. The sculpture quickly took shape, and evolved daily, taking on new characteristics. Dougherty at times referred to it as a pagoda or a layer cake – the excitement and anticipation about the final piece building steadily.

Standing more than 25 feet tall and built without the use of nails or other supportive hardware, the finished piece is nothing short of extraordinary. Dougherty seemed pleased at the conclusion, and satisfied that the evocative sculpture will achieve what he hopes for with each of his installations. “To me, the true nature of art is its ability to enliven people’s imaginations and produce lots of personal associations,” he said. Children will delight in the opportunity it provides for discovery and adventure, while adults will be drawn in as they recall their own memories of childhood exploration.

During his career, Patrick Dougherty has created more than 175 large-scale temporary structures worldwide. The Summer Palace will remain in place at the Arboretum for as long as it lasts in the natural environment, anticipated to be approximately two years. For more information about the exhibit please visit www.morrisarboretum.org. You can also learn more about Patrick Dougherty and view his other work at www.stickwork.net.

This project is made possible with support from the Madeleine K. Butcher Fine Arts Endowment. The Morris Arboretum of the University of Pennsylvania is located at 100 East Northwestern Avenue in Chestnut Hill.  The 92-acre horticulture display garden features a spectacular collection of rare and mature trees in a Victorian landscape. The Arboretum features numerous picturesque spots such as a formal rose garden, Japanese gardens, swan pond, meadows, and the elegant Fernery.  The Morris Arboretum is listed on the National Register of Historic Places and is the official arboretum of the Commonwealth of Pennsylvania.