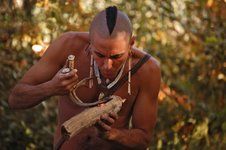 Did the English colonists and the native Wampanoag celebrate “The First Thanksgiving” together?

Yes and no. They did get together for three days of feasting, military exercises, and diplomacy. We know of the event through a letter from 1621 that mentions that the colonists celebrated their first harvest “by rejoicing in a special manner” and that Wampanoag people joined them. But, this event was not a “thanksgiving” of any sort but was a harvest celebration.

This harvest event actually had nothing at all to do with the beginnings of our American Thanksgiving holiday! It was not until 1841 that the three day “harvest celebration in 1621 replete with deer and fowl.”

The primary sources for Plymouth reveal a relationship that was tentatively cooperative. In 1621, the English colonists and (some of) the Wampanoag people had a military agreement, trade relations, regular communications, and even some social interaction. That being said, these two cultures were very different; they had no common language or worldview. I imagine the tone of that feast was both celebratory and watchful on the part of both cultures.

Colonist Edward Winslow’s 1621 letter speaks for itself: Our harvest being gotten in, our governor [William Bradford] sent four men on fowling, that so we might after a special manner rejoice together after we had gathered the fruit of our labors. They four in one day killed as much fowl as, with a little help beside, served the company almost a week. At which time, amongst other

recreations, we exercised our arms, many of the Indians coming amongst us, and among the rest their great king Massasoit, with some ninety men, whom for three days we entertained and feasted, and they went out and killed five deer, which they brought to the plantation and bestowed on our governor, and upon the captain and others. And although it be not always so plentiful as it was at this time with us, yet by the goodness of God, we are so far from want that we often wish you partakers of our plenty. Mourt’s Relation, Dwight Heath, ed. (New York: Corinth Books, 1963)

In other words, the call for celebration seems to have come from the colonial governor, William Bradford, who was not creating a new tradition but simply celebrating the end of the harvest (as was done in England as well). There were about 50 colonists in Plymouth Colony at that time, and they were joined by more than 90 Wampanoag men as well as other Native people from nearby communities.

4.   Can you describe how food was served and the table customs of that time?

In an ordinary family meal, food was placed on the table with diners helping themselves to the dishes in front of them. At larger events with a range of social stations, it was expected that the “better sorts,” or more important people, would eat foods that were superior both in method of preparation and quality of ingredients. That better food would be placed in front of the most honored diners and would not be passed around. Dining was not democratic. At the 1621 harvest celebration, it is certainly possible that more elaborately prepared foods made from the best ingredients were served to the most important diners among the English and Wampanoag, while simpler or “coarser” dishes went to the “common sorts.” Give that a try that at your next dinner party!

In Plymouth Colony, inventories include dishes from pewter plates to simple wooden trenchers. There are a variety of drinking vessels as well, from leather jacks and earthenware cups to costly glassware. The English ate with knives, spoons, and fingers. Spoons were used for soft or liquid foods. Knives were used both to cut food and to convey “gobbets” or morsels to the mouth.

5. Why didn’t the Pilgrims have forks to eat with?

According to colonial inventories, they did not have any eating forks. In early seventeenth-century England, there were forks, from those that held joints of meat for cutting to pitchforks for farming. Eating forks were used at court, though to common Englishmen they smacked of a disdainful “foreignness.” According to

6. How similar was the food to what we traditionally eat today?

Venison and wildfowl (geese and ducks most likely) are the only foods we know for sure were on the tables in 1621. It is likely that corn, pumpkins, and garden produce also figured in to the menu. Remember the 1621 harvest celebration took place over three days and consisted of many different meals. You may note that turkey is not among the food items mentioned by Winslow. I think that is certainly possible that turkey was eaten at some point. Winslow’s list is far from exhaustive and the task of feeding 150 people for three days would likely have necessitated more hunting and perhaps the inclusions of “lesser” meats like shellfish and lobster.

7. What is the biggest misconception about the Thanksgiving Holiday?

That 1621 harvest celebration was “the first thanksgiving”! There never was a “First Thanksgiving” in the sense of a particular celebration that initiated the regular observance of the holiday we know and love today.

8. Throughout American history, how has the celebration of Thanksgiving changed? How has it remained the same?

Since the true roots of our American Thanksgiving holiday are in the solemn religious observances of New England Puritans, the holiday has undergone a huge change. The earliest colonial thanksgivings in the 1600s were sporadic and solemn religious and civil observances in recognition of specific blessings like a timely rainfall or peace after war. People spent the day attending morning and afternoon church services; and though they socialized between and after services, there was little time for a large meal. Toward the end of the 1600s, you see the development of more general autumn thanksgivings. These thanksgivings were spent in church, with the faithful eating no food until late in the day. Over the next century, autumn Thanksgiving observances had evolved in New England into a holiday centered on the family and a bountiful table,

so that by the 1780s the outlines of the holiday we know were clear. By that time, the old custom of two church services a day on Thanksgiving, had loosened somewhat, which allowed for the dinner meal to expand into more than a bite between services, and the holiday acquired many of the characteristics we are familiar with today.

9. What is the significance of eating turkey? How would the pilgrims have prepared the bird?

Turkeys, while native to North America, were already a familiar sight to the English; turkeys had been brought to England by way of Spain by the mid-1500s and became an instant hit as a celebratory food–particularly on the Christmas table in Merry Old England. Turkey also makes a great centerpiece on the table. Unlike today, turkey was often not the only meat dish on the table. Roast pork and chicken pie are also frequently mentioned. New England colonists spit-roasted tender, smaller birds but likely boiled  the bigger, tougher toms.

10.  Did pilgrims make pumpkin pies? Can you give us the recipe for an authentic pilgrim-style pumpkin pie?

We don’t believe that they had pumpkin pies in 1621. The colonists lacked an oven and [their having] wheat flour is pretty doubtful as well. The earliest documented pumpkin pies are a bit after the 1621 event. In some of the earliest recipes pumpkin is treated like an apple–sliced thinly and layered with dried fruit and spices. You don’t see our lovely custardy pumpkin pies until much later.

This is one of our favorite recipes for pumpkin (pumpkin and squash are botanically the same critter–they can be used interchangeably). From Plimoth Plantation’s book: Giving Thanks, Thanksgiving Recipes and History from Pilgrims to Pumpkin Pie:

New World pumpkins and squashes were introduced into Europe in the late fifteenth century. By the time the colonists made their way to Plymouth, “pompions” had gained widespread acceptance in England. In New England, stewed pumpkin was common, everyday fare–a “standing dish”–particularly in the fall and winter. The lyrics to a song traditionally attributed to 1630, reveal the colonists’ dependence on pumpkins:

For pottage, and puddings, and custards, and pies,

Our pumpkins, and parsnips are common supplies;

If it was not for pumpkin we should be undone.

Edward Johnson, who came to Boston in 1630, wrote “let no man make a jest at Pumpkins, for with this fruit the Lord was pleased to feed his people to their good content, till Corne and Cattell were increased.” Perhaps this passage was in response to the merry lyrics of the song. This recipe for stewed pumpkin comes from John Josselyn, an early traveler to New England. His description of the common dish is full of wonderful details that provide both a sense of how the finished dish should taste (“tart like an apple”) and a vivid glimpse into a colonial kitchen (“stew them upon a gentle fire a whole day”). “The Ancient New England Standing Dish” is one of the earliest written recipes from New England.

The Ancient New England Standing Dish But the Housewives manner is to slice them when ripe, and cut them into dice, and so fill a pot with them of two or three Gallons, and stew them upon a gentle fire a whole day, and as they sink, they fill again with fresh Pompions, not putting any liquor to them; and when it is stew’d enough, it will look like bak’d Apples; this they Dish, putting Butter to it, and a little Vinegar, (with some Spice, as Ginger, &c.) which makes it tart like an Apple, and so serve it up to be eaten with Fish or Flesh: It provokes Urin extremely and is very windy. John Josselyn, New-Englands Rarities Discovered (1672)

1-2 teaspoons ground ginger (or any combination of nutmeg, cloves, cinnamon, and or/pepper, to taste)

Place the squash, butter, vinegar and spices in a saucepan over low heat. Stir and heat until all of the ingredients are well combined and hot. Adjust the seasonings to your liking and serve. Serves 8