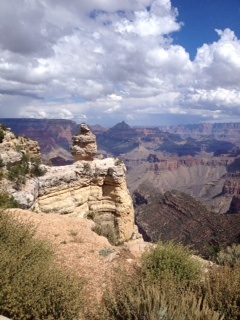 Sue Olsen, a founding member and first president of the Hardy Foundation Quarterly recently spoke at the Dunn Gardens, a 10 acre garden overlooking the Puget Sound and the Olympic Mountains designed by the Olmsted Brothers.  Ms Olsen, owner of Foliage Gardens Fern Nursery, is author of the Encyclopedia of Garden Ferns, published by Timber Press and has been studying, photographing, and writing about ferns for more than four decades.  She is a graduate of Cornell University and lives in Bellevue, Washington.  In her book, Ms. Olsen focuses primarily on the temperate species of ferns but also includes tropical ones. The remarkably comprehensive plant directory presents succinct descriptions for nearly 1000 ferns from Acrostichum to Woodwardia, with habitat information, cultural recommendations, and help on plant identification. Chapters on the history, cultivation, propagation, and structure of ferns; a series of appendices highlighting plants most likely to thrive in various locations throughout the world and in special conditions; and lists (with contact information) of fern societies, places to see ferns, and specialty nurseries provide readers with everything they need to know to deepen their knowledge and appreciation of ferns. This expansive, well-organized reference is enriched with anecdotal insight and lavishly illustrated with 700 photographs.

In 1914, Arthur Dunn purchased 10 acres of undeveloped rural land in what is now the Broadview neighborhood of Seattle. The gently sloping property was extensively wooded, had ample open space for garden development, and commanded sweeping views of Puget Sound and the Olympic Mountains to the west. In May 1915, Arthur Dunn approached the Olmsted Brothers, the renowned landscape design firm of Brookline, Massachusetts, to locate a cottage and prepare a landscape plan for what would become the Dunn family’s summer “country place.”

True to the Olmsteds’ design philosophy, the master plan retained and enhanced many of the site’s natural features. The plan took advantage of the western slope’s panoramic views, a ravine crossing the southern edge of the property, and large stands of second-growth Douglas firs. The house was sited to take in the sound and mountain views, while a tennis court, vegetable garden, and garage building were located to the east.

In spring of 1916 the Olmsted Brothers delivered the planting plan, which preserved many of the property’s existing fir trees and other plants. The plan included irregular groups of spring-flowering shrubs and large drifts of bulbs. Many deciduous trees were added, creating diversity of texture and color. Arthur Dunn implemented the design himself. Any changes he made respected the spatial character of the Olmsted plan. He was a keen and knowledgeable gardener and took considerable pride in his garden.

The original low-lying grey-shingled house was designed by the Seattle architectural firm of Bebb and Gould in 1915. The Dunn family retreated to the rural residence each summer until Arthur Dunn’s death in 1945.

The grounds were divided among family members and three new homes established in the 1940s. The summer house was destroyed in 1949 and a new one was built for year-round use, imitating the low-lying style of the original cottage. An additional house was constructed, nestled unobtrusively near the croquet lawn, and the garage on the east side of the estate was converted into a home for year-round use.

Despite the removal of the original house, the Olmsted landscape structure is still intact. The characteristic curvilinear drive and foot paths remain. The edge of the Great Lawn follows the Olmsted plan and the deciduous trees planted by Arthur Dunn still provide visual contrast to the south. Though the views of the mountains disappeared in the 1930s, new views opened up as Douglas firs were removed by neighbors to the west in the 1990s. Internal vistas and the spatial arrangement of the original and planted trees strongly define the Gardens to this day.

Edward Bernard Dunn, the second child of Arthur and Jeanette Williams Dunn, converted the garage building into his residence in 1947. He immediately began creating a woodland garden on the 2.5-acre site where the garage and vegetable garden had been; he tended this garden until his death in 1991.

An enthusiastic gardener and prolific garden writer, Edward Dunn was respected as an authority on Pacific Northwest native plants. He was president of the Seattle Arboretum Foundation from 1957 to 1960, and guided the development of its Japanese Garden. He also served as president of the American Rhododendron Society from 1965 to 1969, and was awarded that organization’s Gold Medal in 1972. A founding member of the Species Rhododendron Society, he served as its president in 1971.

The woodland garden reflects Ed’s love of plants. The richness and diversity of the plantings are reminiscent of William Robinson’s English woodland gardens. The collection includes rhododendrons, specimen flowering trees, and woodland plants such as erythroniums and trilliums, sited beneath a canopy of fir and deciduous trees that remain from the original garden.

Pictures of Arthur and Jeanette Dunn and their son, Edward Dunn are courtesy of Dunn Gardens.

« Poplar Island
Andorno, Italy and Its Landscape as Described by Edith Wharton »