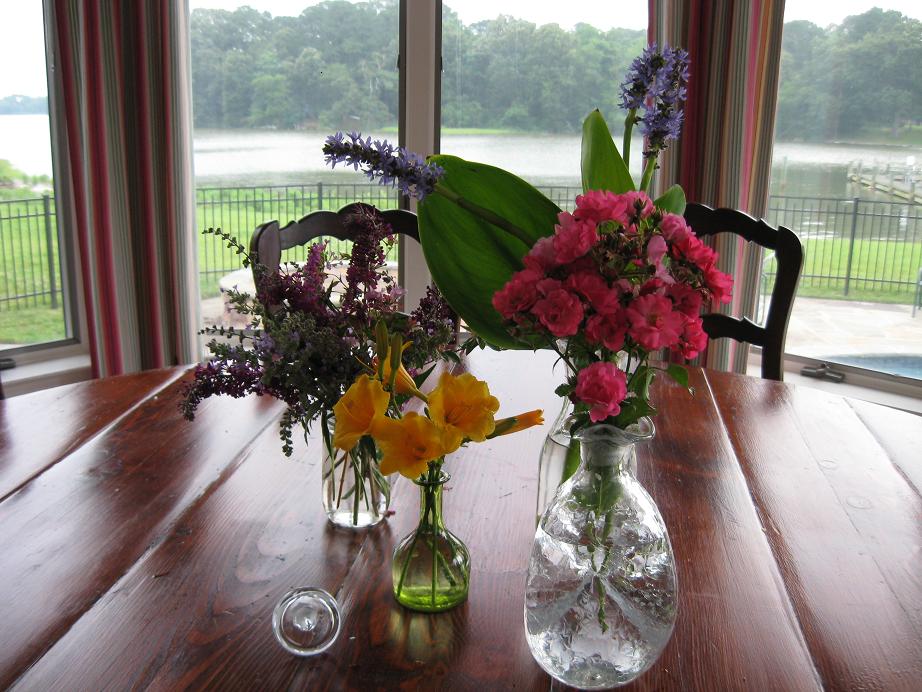 We had the good fortune of spending the weekend in St. Michaels.  On Saturday we went to the Farmer’s Market in Easton.  My husband realized he had to kill some time because I instantly became engrossed with Terry Jordan of Longridge Gardens who had some really neat ornamental grasses for sale.  Terry’s philsophy is to plant whenever possible material that she can use in her arrangements.  I bought 3 Blue Dune Grasses and 3 Mexican Grasses.  The stalks were already showing on the Mexican Grass, a very fine, delicate, seed head.  Her lilies were magnificent, all sold in the arrangements she had made for her customers.  I don’t have any Oriental lilies and it just so happened that after we left the market the next stop was Target’s.  Yes, the Eastern Shore is growing.  There I found some Smith and Hawkins prepackaged pots with 3 lilies and inflatable dirt inside.  The price was right and I bought 3 pots of the lilies and one of the calla lilies.  Perhaps it’s too late to see them come up this year but my cutting garden will have them to snip next year.

There’s the Miles River on your left just off our creek.  But I should really be talking about flowers.  The water vs flowers?  All I can say about this foreground in the pix is that I took cuttings from vitex ( sort of like butterfly bush but better architecturally, stella d’oros, pink knock out roses, purple butterfly bush and catmint to give the table some flowers which really aren’t necessary when all you want to do is look outward  The ginger from the pond has a stunning leaf for some drama.  Anyway jars and jugs were used to show specimens, flowers that really wouldn’t be used all together in an arrangement but show off nicely by themselves yet in a grouping.