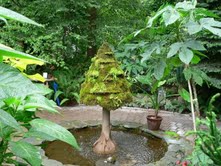 Many may know that two years ago, Little and Lewis sold their garden of eighteen years and moved next door to begin anew. Like the former property, the new garden sits on about a third of an acre in a residential neighborhood, and is once again an exotic oasis surrounded by tall fir trees. The dappled light-filled garden features tropicals and interesting architectural potted plants grouped around a stone-paved courtyard. An eight-and-half foot moss covered rain tree creates the lyrical sound of water and a forty-five year old Japanese maple presides over an abundance of sculptures found throughout. The whole garden has the feel of one of the ancient sites of which George and David are so fond, although, except for the established trees, the garden is only about ten months old.

George and David Lewis, partners in Little and Lewis, have been collaborating on their unique concrete sculptures since early 1992. They travel frequently to Mexico absorbing the light, color and architecture that so influence their work. Many people from all over the world annually visit their internationally known garden-gallery, one of the most photographed in the country. Their beautiful color-washed concrete sculptures and installations have been widely photographed and can be seen in many books, magazines and on television, including Martha Stewart Living, The Victory Garden, and House and Garden Television. Their work has been placed in private and public gardens and homes across the United States and other countries. Their first book, A Garden Gallery: The Plants Art and Hardscape of Little and Lewis published by Timber Press has become a runaway “bestseller” in the gardening world, winner of a silver medal from the Garden Writer’s of America and is already in its fourth printing.