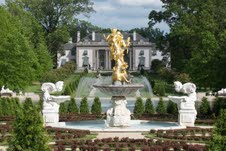 Nemours Mansion & Gardens has completed a $39,000,000 restoration and re-opened the gates to its majestic landscape.

This mammoth reconstruction was done over a three year period utilizing world-class conservators and craftspeople who worked on excavations, landscaped the formal gardens, drained and repaired the 800,000 gallon reflecting pool, replaced electrical systems, and refurbished statues, paintings, furniture and tapestries.

Originally constructed in 1910, Nemours Mansion is one of the grandest buildings ever constructed in Delaware and includes the largest formal French garden in North America. Renowned architects Carrere and Hastings who were also the designers for the New York Public Library, New York City’s Frick Mansion, and Whitehall, the Henry Flagler Mansion in Palm Beach designed this duPont “house”.

The revitalized gardens closely follow the model of the Petit Trianon at Versailles. Here, at Nemours, the spectacular statue Achievement has been placed at the garden’s center. Designed by French artist Henri Crenier, it looms over the maze garden on an elevated marble pedestal vase. Covered in 23-karat gold leaf, this magnificent sculpture stands as the inspired centerpiece of the Nemours vista.

The mansion is presented as a “home”, not a museum. It contains more

than seventy rooms spread over five floors occupying nearly 47,000 square feet and is fully  “one acre under one roof”.  Its unique furnishings include rare French 18th century furniture and there is a stunning, individual collection of great art.

The original estate was fully self sufficient with orchards, vegetable gardens, a dairy herd, beef cattle, greenhouses, a power plant and even ice-cream making machines. This landscaped jewel in the Brandywine Valley is a fitting crown for the legacy of Alfred I. duPont. His philosophy was one of kindness, fairness and responsibility. He believed that “it is the duty of everyone in the world to do what is in his power to alleviate human suffering.” The charitable trust established through his will became the Nemours Foundation and continues to improve the lives of children to this day.

He asked that Nemours Mansion & Gardens be preserved and improved upon for the pleasure of the viewing public. The restoration of the Mansion & Gardens is true to the trust that Mr. duPont placed in the hands of his trustees.

The Horticultural Society of Maryland will tour Nemours on June 9th, 2010.   TO MAKE RESERVATIONS:    store.mdhorticulture.org

Alfred I. DuPont was a quintessential Victorian who lived well into the 20th Century and whose remarkable achievements contributed to the modern world and helped change the way we live. He was a photographer, manufacturer, pugilist, musician, politician, banker, inventor, suffragist, newspaper owner, yachtsman, businessman and philanthropist. And through his will he achieved a tremendous accomplishment by creating a foundation that has insured the well being and good health of millions of children.

In 1884, he began his work for the DuPont Company  in Delaware as an apprentice powder man.  He rose swiftly through the ranks of the company and became a partner in 1891.  During his years with the company, he played a lead role in developing more than 200 patents, including one for the first gasoline powered locomotive in the United States.  In 1902 Alfred and his cousins Pierre and T. Coleman duPont purchased the company to keep it in the family. In 1909 Alfred used some of his profits from the Du Pont Company to begin construction of the grandest house that was ever built in Delaware, Nemours for his wife, Alicia.

Although the noted architectural firm of Carrere and Hastings designed   both the mansion and the gardens, Alfred played a key role in the development of  the estate. He regularly walked every inch of the 3,000 acres, designed the hydraulic systems that supplied water to the fountains and house, refined the architects’ design  of the mansion façade, oversaw the construction of the greenhouses, and insisted on the  introduction of the latest in mechanical and electrical technology.

He died in 1935 and left a will that provided for a remarkable legacy.  Not only did he specifically instruct his trustees to maintain and preserve Nemours Mansion and Gardens “for the pleasure and benefit of the public,” but he also created The Nemours Foundation, which today provides healthcare to hundreds of thousands of children each year across the Delaware Valley and in Florida.

« Celebrate Earth Day with Melanie Choukas-Bradley, “City of Trees” Author
Suzy Bales, American Horticulture Society’s Garden Writer of the Year, Shares a “Morning in the Garden” to Benefit the Community Projects of the Hardy Garden Club of Baltimore, Maryland »