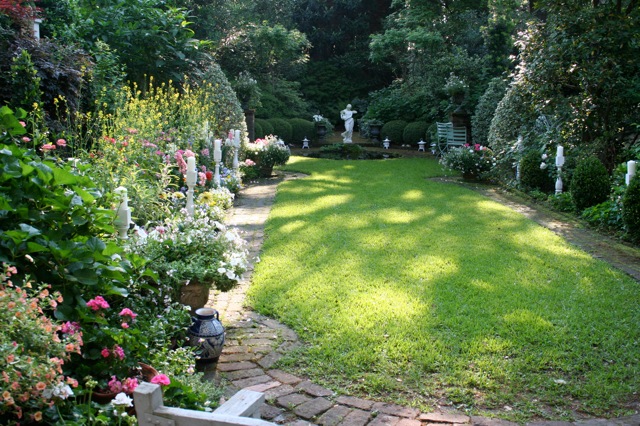 “Mrs. Whaley and Her Charleston Garden” by Emily Whaley In Conversation With William Baldwin

Mrs. Whaley’s  Charleston garden measures 30 feet by 110 feet and stands behind an 18th century clapboard home.  Charleston is known as “the City of Gardens” and William Baldwin said Mrs. Whaley’s garden is the most visited private garden in the United States.  Mrs. Whaley said she never walked in the garden without clippers in her hand.  Essential to a garden were boundaries, a large evergreen to anchor and than smaller trees to create the lived in space.  Hers was a garden of rooms, a design that had been laid out by Loutrel Briggs, a noted landscape architect from New York who wintered in Charleston and designed many of the city gardens and country plantations.

Emily gave a verbal tour of her garden to William Baldwin in the book, “Mrs. Whaley and her Charleston Garden.” The tour takes place in April, “the most beautiful month of Charleston,” she said.  Roses, oleanders, parkisonia, azaleas create structure to the garden and irises and ferns fill in.  She used both annuals and perennials, but tore both out at the end of the season.  Loutrel Briggs used circles in his designs, statuary for focal points, and water, even still water to act as a reflecting pool.  Paths take the explorer round hidden rooms to establish a one to one relationship with plants. Briggs established rooms for contemplation, rest, conversation.  He used a lawn as a quiet part of the garden.

Mrs. Whaley’s Garden is on tour during the Historic Charleston Foundation House and Garden Tour.

A complete calendar of events and ticket prices can be found at www.historiccharleston.org or by calling 843-722-3405.