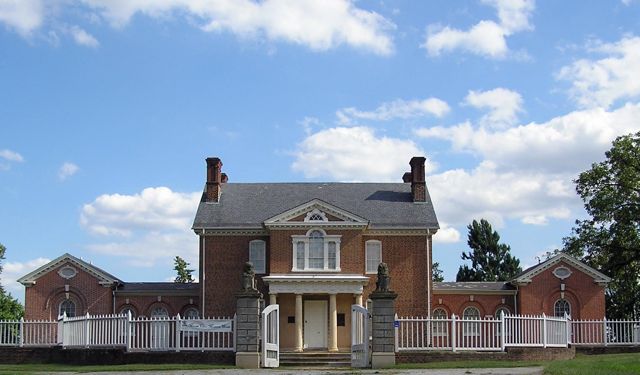 Mount Clare was built as a summer home by Charles Carroll, Barrister in 1756. Mr. Carroll, Barrister (as opposed to four other Charles Carrolls living at the time in Annapolis, MD, therefore the distinction Barrister) married Margaret Tilghman from the Eastern Shore of MD (while single Charles paid 20 schillings a year as a “persistent bachelor”.) Margaret, his wife, was an avid gardener and Mt. Clare had a greenhouse where citrus trees were grown in tubs and a pinery for pineapples (no longer in existence.)

It is thought that while General George Washington was passing by Mt. Clare on his way back to Mt. Vernon he looked over his (right shoulder?) and remarked to his aide de camp, Tench Tilghman (cousin of Margaret’s) “I want to build a greenhouse. Tench, could you ask your cousin how she built hers?” There ensued correspondence (as researched by the Mt. Clare staff and noted in letters between Margaret and Tench and subsequently Washington himself), how the greenhouse should be laid out, how it should be heated by a fireplace with flues running under the floor and how the window sashes should open from the bottom as well as the top for proper circulation.

As noted in other letters, Mrs. Carroll gave General Washington citrus trees for his greenhouse. To look at the recipes that Mrs. Carroll used for her dining, it is understandable that she would need lemon and lime juice to make her delectable desserts.

April 7 thru may 23: “Teapots: Objects to Subjects” will be on display at Mount Clare. Teapots designed like a stack of cardboard boxes, a female sunbather and a painting of Botticelli are among the innovative designs by the best entries of the 2004 Survey of Contemporary American Teapot at the Craft Alliance in St. Louis, Missouri.
« Pieris
Mount Vernon, Alexandria, Virginia »