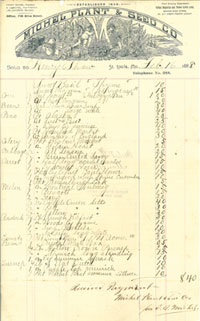 In doing research for theGarden’s 150th anniversary, the Garden’s archivist, Andrew Colligan, found a slip of paper dated February 16, 1888. It was a receipt for vegetable seeds from Michel Plant & Seed Co. “sold to Henry Shaw.” At that time, the developed botanical garden open to the public only extended north from Shaw’s home. Southwest of Tower Grove House, where the Boxwood Garden now sits, was the “farm,” an area of land where Shaw raised livestock and grew crops for his own table.

In honor of the Garden’s sesquicentennial celebration, a large array of heirloom vegetables has been added to the Kemper Center for Home Gardening. Several heirloom varieties that could be found in Shaw’s original vegetable garden will be on display.

An heirloom plant is, most simply, a variety that was grown in earlier times. Heirloom plants have maintained their original traits for 50 years or more through open pollination by birds, wind, or other natural methods. Of course, some are much older and some are even pre-historic. Very few are in large-scale production. Open pollination means they grow “true to type,” that is, they can produce plants identical to the parent from seed. Thus, the same variety can be reproduced each time it is grown.

Heirlooms play an important role in modern vegetable hybrids. Hybrids are produced when humans (or nature) cross two distinct, different parents (often heirlooms) to produce what is called an F1 hybrid. These plants can exhibit hybrid vigor and may combine the best qualities of each parent, such as resistance to disease and/or insects, high yield, or good flavor.

Plants grown from the seeds of these F1 plants, however, will not be identical to the parents. Hence, seed is not saved from F1 hybrids for future use. The important role of heirlooms then is that the original parents (again, often heirlooms) need to be crossed each time to produce the valuable F1 seed.

If we lose the heirloom, we can lose the parents of the F1 hybrids and the valuable and useful genes the heirlooms possess.

There are several organizations that specialize in saving and selling heirloom seeds. Some of the most popular are
Baker Creek Heirloom Seeds
Seed Savers Exchange
Southern Exposure Heirloom Seeds
Victory Seed
Amishland Seeds

Many heirloom varieties are available and some companies provide historical information as well as growing instructions.

The Missouri Botanical Garden holds all copyright to this article. Any other use of it is prohibited without expressed written consent.