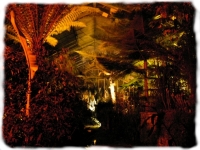 Garden Of Light – Walk The World

For two nights in February 2010, visitors will be able to walk through the extensive grounds of the University Of Dundee Botanic Gardens and experience a spectacular display of light and sound.

Taking inspiration from the impressive collections of plants from around the world, this event is themed to reflect and recreate some of the sounds of the continents and cultures of the world. Following on from the highly successful Garden of Light in February 2009, the 2010 event is expected to be very popular and will be significantly larger. For the first time the event will extend into the extreme eastern end of the garden to bring the Asian plant collections into full view. The Australian area has been expanded and new interactive elements will test the skills of young and old alike to create your own light shows.

With over 19 acres of garden to be illuminated – and over 2 kilometers of marked trails, the Garden Of Light is by far the largest outdoor sound and light show in Scotland.

With all music being specially commissioned for the event, and approximately 400 lights spread throughout the grounds – this event offers a spectacular and unique experience which sets itself out from the crowd and makes it a must see event in 2010.

The event is not just for plant lovers but will appeal to the whole family, and with varied entry times – you can choose a time that suits you.

The University Of Dundee Botanic Garden is situated in the west end of the City – it is therefore easily accessible and only a few minutes by public transport or car from the city centre. Getting to such a show has never been easier!