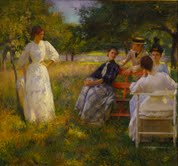 Edmund Tarbell’s “In the Orchard” on Display at Cheekwood’s Museum of Art, Nashville, Tennessee

The American Impressionists in the Garden, currently on view at Cheekwood’s Museum of Art, includes a very large painting in the entrance gallery that holds every visitor’s attention.  Edmund Tarbell’s In the Orchard (1891) has all the formal elements of a true impressionist painting: vibrant light, animated brushwork, and the casual atmosphere of a leisurely spent summer.  Using brilliant shades of white, yellow, purple, and green, Tarbell painted this social gathering outdoors as deftly as any French Impressionist. Yet this artist from Boston was still a newcomer to the Impressionist movement.  He had studied in Europe where he followed a traditional academic course of studies as a figure painter.  Tarbell began working on In the Orchard by sketching an actual orchard landscape in France in 1886.  After his return to Boston, he completed the painting and added the figures, family members and friends posing in the backyard of his wife’s home in Dorchester, Massachusetts.  His training as a figure painter is evident in the static poses of his model, but Tarbell’s use of prismatic colors and rapidly applied paint strokes are hallmarks of Impressionism.

Tarbell’s return to Boston coincided with a crucial period in the dissemination of Impressionism in the United States.  In 1890, John Leslie Breck and two other American artists who had worked in Giverny, France, home of the famous Claude Monet, exhibited their paintings in Boston.  In 1892, Monet, himself, had his first solo exhibition there.  Boston thus became fertile ground for Tarbell, and In the Orchard reveals his confidence and ease in working in the new style.  It launched his career as a major representative of the “Boston School” of Impressionism and led to his membership in the Impressionist group of Ten American Painters which included artists from Boston and New York.  In In the Orchard Tarbell masterfully combines solid academic training with full-blown Impressionist techniques.  It is an important achievement by a Boston Impressionist and a milestone in the evolution of Impressionist garden painting.