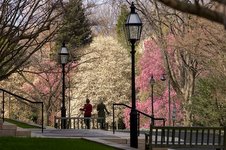 The Arboretum now part of the Barnes Foundation was originally founded as a private arboretum on the property of Captain Joseph Lapsley Wilson (1844-1928). Captain Wilson was a veteran of the Civil War, and worked for the Little Schuylkill Navigation Railroad and Coal Company for thirty-eight years. In 1880, Captain Wilson moved from Philadelphia to a property in Merion, and established an arboretum with over two hundred specimens of trees, a number of which are still extant.

Dr. Albert C. Barnes (1872-1951), who had built his own house, “Lauraston,” just down the road, purchased Captain Wilson’s property in 1922 for the purpose of erecting buildings to house his art collection and educational programs related to his recently chartered educational institution, the Barnes Foundation. The sale included the stipulation that a house would be constructed on one side of the property, which Wilson and his wife would be allowed to rent for the remainder of their lives (this house is now called the “Arboretum House”).

In 1934, Dr. and Mrs. Barnes commissioned a formal garden plan from landscape architect Frank Andrew Schrepfer, University of Pennsylvania professor of Landscape Architecture. Schrepfer’s work included the rose garden and the Wisteria arbor. In an article written for the journalLandscape Architecture, Schrepfer wrote that “in addition to the education value of the [living] collection, the planting is being arranged to achieve the finest possible landscape and garden effects. Thus, most plants have a dual purpose to serve: as a part of the general collection and as parts of the general esthetic scheme.” Several years later a structured perennial garden was designed by Frederick W. G. Peck, a landscape architect who also designed the Fairmount Park Azalea Garden, as well as Pastorius Park.

Schrepfer also taught the first horticulture course held at the Foundation, offered from 1934-35, and aimed to address “the aesthetics of plants, trees, and their formal organization.” In 1940, with the assistance of noted botanist Dr. John M. Fogg of the University of Pennsylvania, Laura Barnes established the Arboretum School. Instructors included Laura Barnes and Dr. Fogg, as well as Frederick W.G. Peck.

« Olana, The Home of Frederic Church, A Tour in Its Fall Glory
“Quality Control of Herbal Drugs, An Approach to Evaluation of Botanicals” by Dr. Pulok K. Mukherjee »