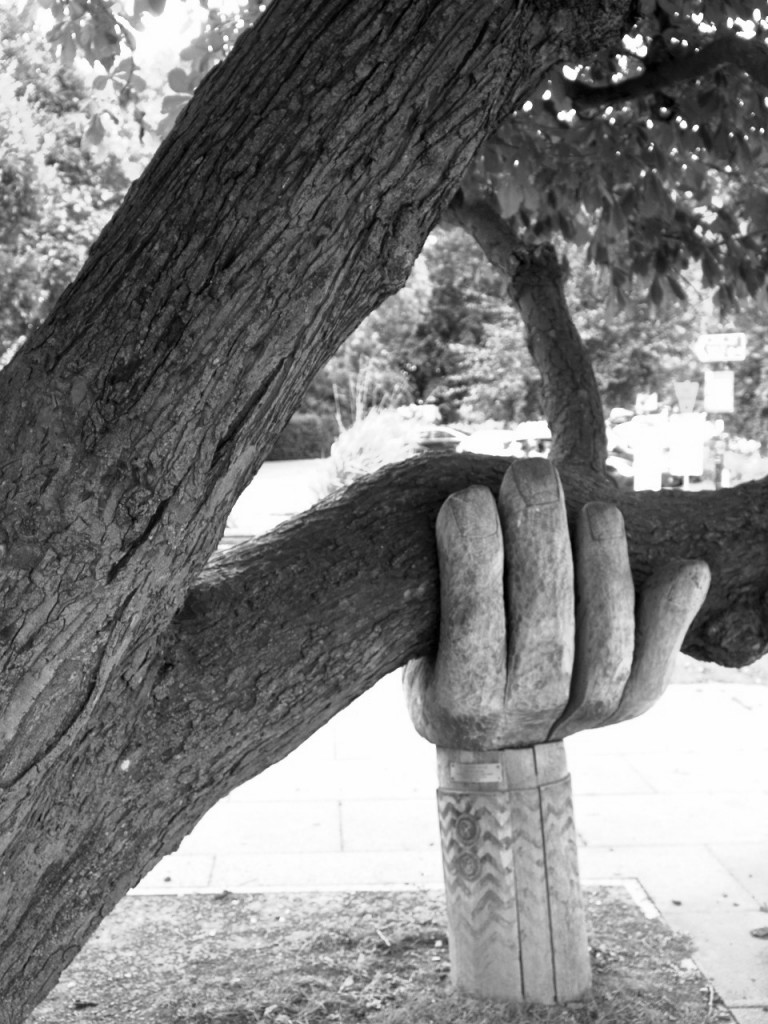 The “Helping Hand”, which holds up the “Wonky Conker tree,” near Kingsley Statue on Bideford Quay in England, very nearly didn’t happen at all.  Some years before  its construction, it was decided to chop down the mature trees on the riverbank in order to facilitate the building of the new car park.
Many trees were sawn down on a Sunday before an outraged public became aware of the destruction.  One brave fellow sat by the “Wonky Conker”, successfully to save it from the chainsaws.
A few years later, Doug Jenkin of Torridge District Council telephoned me, explaining that the “Wonky Conker” was in need of some physical support.  He asked me if I had any ideas.
After mulling things over, we came up with the idea of a hand thrusting through the paving stones to support the large horizontal branch.  This idea was eventually approved and I set to work.
I bought some large lengths of oak from Torridge Hardwoods in Littleham, and with help and advice from my friend Barry Hughes, I worked out how to undertake the project.  Firstly, the branch was supported by a metal prop that had been set into the ground.  I then constructed the sleeve around the prop.  The next stage was to form the fingers from individual lengths of oak and bolt them all together.  Finally, the fingers, palm and thumb of the hand were set into the sleeve.
The “Helping Hand” project was covered in the local press, including an illustration of what was proposed.  At this stage, a lady called Mrs Mayhew contacted Torridge District Council to say that she would like to pay for its construction, in memory of her late husband Samuel.  This is why the initials S.T.M. and dates 1914-2000 were carved into the cuff.
The “Helping Hand” has been supporting the “Wonky Conker” for ten years.  It is well weathered and has become a much photographed landmark.   I hope that it will continue to give pleasure to Bidefordians and visitors for years to come.