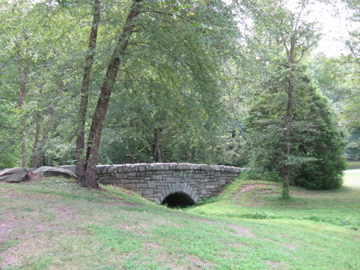 Frederick Law Olmsted was very pleased when George Vanderbilt hired him to design the landscape of his new home, the Biltmore in Asheville, a project Olmsted began in 1892.  Olmsted was nationally known for his work in the public sector and the occasion to work on such a large scale, 125,000 acres in the western mountains of North Carolina was an opportunity unparalleled in his career.

He designed an arboretum, a conservatory, rose gardens, meadows, a forest and a three mile approach to Vanderbilt’s French chateaux- styled home “with a mixture of shade trees, small trees and large shrubs … which challenged the ‘decorative public garden’ approach,”… creating “instead the natural character of place,” according to Charles E. Beveridge and Paul Rocheleau in their book, Frederick Law Olmsted, Designing the American Landscape, a David Larkin Book, 2005, originally published by Rizzoli in 1995.

Signature Olmsted techniques are clearly visible on a recent trip to the Biltmore.  The tree-lined wooded drive approaching the home curves and holds surprises around the bend. A pasture appears, Olmsted’s use of juxtapositions.  Beyond, a brook crosses the scene with an Olmsted organic bridge. Busy thoroughfares are diverted by overhead bridges so as not to interrupt the visitor, a concept Olmsted used in Central Park, New York.  Once at the summit, a turn and then there is Mr. and Mrs. George Vanderbilt’s glorious home taking your breath away.

The Esplanade at the Biltmore, credit: CarlisleFlowers

Front of the Biltmore Olmsted introduces a formality to his design:  a rectangular lawn extending  from the house toward an esplanade with three fountains. The Biltmore’s ramble takes the visitor on a walk of curves and specimen plantings.  The grand vista, his terrace with a view arrives from the other side of a pergola draped with twisted wisteria vines – the backdrop to George and Edith Vanderbilt’s home, the Blue Ridge Mountains.

View of the Blue Ridge Mountains from the Biltmore Terrace, credit: CarlisleFlowers